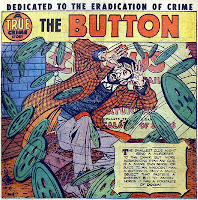 The table of contents for this volume takes the quality of Everett's artwork to another level. We finish off the 1938-42 Golden Age non-Marvel work, but the rest of the volume is filled with tons of surprises that will blow your mindhole! You can't miss this one if you want to see the best of Everett's best.

It's another 200+ pages of artwork, plus all the extras you enjoyed from volume one, such as a thorough introduction and detailed notes for each section that place the work in its historical context and talks about the how the industry worked in its naive heyday.

But we need help! Get a free copy of the book!

There's two short stories from the early 1940s that we can't locate. If you have these books, please email me at ditko37@rogers.com. We'll give you the specs for the high-rez scans and how to get them to us. Here are the two books:

If you can help, we'll send you a free copy of the book and put your name in the Acknowledgements. Look for the volume to come out in April 2013.
Posted by Blake Bell at 7:34 PM No comments: