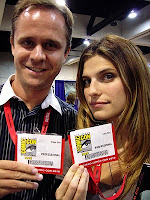 What's more exciting than Wednesday at the San Diego Comicon? Thursday at the San Diego Comicon, but of course. Today (Friday) will be even more special because Wendy Everett, the daugther of the late Bill Everett, will be attending the show and doing a signing at the Fantagraphics booth (#1718) with me before our panel together tomorrow (Saturday) at 5:30pm (Room 9). Her father was an enormous talent, having created the Sub-Mariner for the very first issue of Marvel Comics (back in 1939) as well as having co-created Daredevil with Stan Lee for Marvel in 1964. He passed away far too soon at the age of 55 and, now, 37 years later, I get the chance to present Wendy with a copy of the book that we both put so much time and effort into this past year.

It was wild yesterday to see my Everett book sell out before my very eyes. And the attendance only grows over the next 3 days, so who knows what it would have sold if there were copies available, but these ones were flown in from overseas to debut at the show, so we're lucky they're here at all. The publisher is bringing down 10 more today. Should be available no later than noon. I think my "Strange & Stranger: The World of Steve Ditko" book also sold out yesterday too.

In the morning, I had finished up my comic purchases and had a great time finally meeting Howard Cruse whose husband I had profiled in my "I Have To Live With This Guy!" book from 2002. I moderated the "Spotlight On Howard Cruse" panel and we needed another 30 minutes at least to cover all the aspects of Howard's long career. Vertigo has just released a 15th anniversary version of Howard's seminal "Stuck Rubber Baby" graphic novel and it appears that history is finally catching up to Howard, the book still representative of the best in graphic storytelling.

Click here to view all my Con pictures, including Thursdays. They include a shot of me and Howard, and a picture of me and Maggie Thompson who I lucked into having lunch with. Maggie's been with the Comic Buyers Guide forever and she too was ahead of her time, ushering in the fanzine movement in the early 1960s with her late husband Don. Maggie gave me more details on two drawings that she has framed at home, originals done just for her and Don by none other than Steve Ditko. One's of Spider-Man (with at least Doc Ock in the picture, amongst other villains) and the other of Dr. Strange, done around the time of Amazing Spider-Man #7. She's never let them see print, but next time I'm in Wisconsin, I know my first stop!

I got to remake acquaintances with some of my favourite people in the business. Batton Lash, fellow Ditko enthusiast and creator of the Supernatural Law comic, and me could be found discussing Everett and Ditko at his booth, and we were joined by Russ Maheras, artist and fanzine/small press pioneer (and fellow Ditko enthusiast). Also at Batt's booth was artist Melissa Uran. Check out her print of Bill Everett's 1939 Sub-Mariner. It's dynamite, as are her prints of Dr. Strange, Dr. Doom and Iron Man. Track her down at Batt's booth and buy all four in a package. The original art for them looks great too. I also had the pleasure of meeting Robert Wiener of Grant Books for the first time. His contributions of Funnies Inc material for my Bill Everett book was absolutely invaluable. So much stuff that has never seen the light of day until this book. Thanks Robert!

At my 5pm signing yesterday, had a chance to meet Gilbert Hernandez (Love & Rockets) again who cursed me out for not including a Man-Bat image in my first Ditko book! Thank God Fantagraphics put out those almost-pocket sized version of Love & Rockets editions because that's what got me hooked on his material, and he's one of the few artists who I'll be anything by these days.

The craziest moment of the signing is represented in the picture above. Actress "Lake Bell" (of "It's Complicated", which also starred Meryl Streep, Alec Baldwin and Steve Martin, plus a run on "Boston Legal" and many other endeavours) stopped by the booth, bought my first Ditko book and we couldn't get over how we were one letter away from having the same name. You can't spell "Blake Bell" without "Lake Bell". And I forgot to mention that she's only one letter different from my son "Luke Bell"!

After the show was over, walked back to the Marriott with Neal Adams and, in the elevator, a man started quizzing me about my next Ditko book, saying how much he liked my first two. I didn't realize who it was until he exited and someone said, "That's Tom Kenny, the voice of SpongeBob SquarePants." Even SpongeBob loves Ditko!

Heading out to the show now to tour the Convention Centre with Wendy Everett, then it's our signing at 6pm at the Fantagraphics Booth. See you there!
Posted by Blake Bell at 11:41 AM