Amazing Mysteries: The Bill Everett Archives v1 hits comic-book stores this week (although, in true comic-book fashion, some slipped out to the East Coast last Wednesday, and it doesn't hit bookstores and Amazon.com until next Monday).

It's 240 pages of all Everett Golden Age goodness featuring rare and never-before-reprinted work from titles such as Amazing Mystery Funnies (1938), Amazing-Man Comics (1939), Target Comics (1940), Heroic Comics (1940), and Blue Bolt Comics (1940). Join us in Toronto on Wednesday, February 29 at 7pm for the Book Launch Event hosted by The Beguiling.

The reviews are coming in and are superlative regarding the production of the book, and reveal the fascination of watching Everett's style evolve. Oddly enough, some of the reviews use language that contradicts the expressed purpose of how I organized the book - by "action hero" versus strict chronology. In other words, I included works of Everett from 1940-1942 to highlight the change in Everett's style in 1940 to that well-known slick, polished style, so that readers who buy this, or the subsequent, volume would have a sampling of his work from 1938-1942 to compare.

If I had gone strictly by chronology, you would have only seen the more raw material from 1938-39, plus you wouldn't have a sampling of virtually all of Everett's creations in each volume. Alas, I don't envy a reviewer's workload when it comes to absorb 240 pages of this volume plus every other product that came out in the given week. Rest assured, though, that while the first half of volume one is Bill's comparatively raw style, you do get a huge sampling in the book's second half of his more polished work. Volume two will also take this to the next level, as it will include his super-rare 1950s romance and adventure work for Eastern, plus some unexpected Everett goodness! Here are snippets of the reviews to date:

Comic Book Resources - "What’s exciting for me about this book is watching Everett develop as an artist and storyteller and figure out the medium in relatively rapid fashion. His lettering, clunky and stylized in his initial Skyrocket Steele story, quickly more straightforward and easier to read. His composition becomes more assured and dramatic. He clearly starts thinking of the page as a unit and not a bunch of unrelated panels as they stories start to seem less cluttered and more refined.

Publisher's Weekly - "This volume provides an illuminating look at the artist’s numerous attempts at catching Sub-Marineresque lightning in a bottle for a second time."

Comics Bulletin - "For fans of comics from the dawn of the comic book era, this book is an indispensable gift from Blake Bell and Fantagraphics."

Booksteve's Library - "Presented chronologically, one can witness Bill's design skills develop by leaps and bounds even as his storytelling skills just seem to have come naturally to him. Compiled by Blake Bell, author of the still recent Bill Everett biography, who provides some insightful text and art samples throughout, fans of Golden Age comic books in general and key artists in particular have a treasure trove here similar to Vanguard's recent Wally Wood volume. Lots of fun, colorful stories with some of the best artwork of the late 1930's and early 1940's."

Michael T. Gilbert - "The reproduction is absolutely superb, shot from the original comics but really cleaned up nicely. It's truly a pleasure to look at, and Blake's insightful commentary on Everett's life and career is fascinating. Early efforts like Amazing-Man and Skyrocket Steel, reprinted here, display Bill's early efforts when he was still learning the ropes. But even then Everett had an uncanny knack for telling an exciting story with unexpected twists and fascinating characterization. For my money, Bill was as great a writer as he was an artist (and more's the pity he wasn't encouraged to write more of his own material in the 60s!). This is the collection hardcore Everett fans have always wanted to see, but never dreamed they would. The incredibly rare stories in this book aren't as slick as say, Lou Fine or Will Eisner, but the stories themselves are really terrific and very readable."

We hope you’ll join us for the Bill Everett Book Launch on Wednesday February 29 in Toronto for Amazing Mysteries: The Bill Everett Archives v1. We’ll be featuring some dazzling early work by Everett in my brand new slideshow on the Sub-Mariner creator, as well as on Steve Ditko. (Mysterious Traveler: The Steve Ditko Archives v3 went to the printers last week! Out in Q2!)

Perhaps the most dazzling piece of Everett artwork from the early Golden Age of Comics (Everett produced work during this period from 1938-1942 before going to war; he started up again in 1946) is the original origin story for the Sub-Mariner. Most people remember the 12-page story in color from Marvel Comics #1 in 1939 but, prior to owner Martin Goodman commissioning that first book, Everett had already worked up the original 8-page version for a movie theatre promotional giveaway called Motion Picture Funnies Weekly. It was produced by the Funnies Inc. shop (i.e., a studio of comic-book creators that packaged comics for publishers unwilling in these early days to have their own stable of paid employees) that Everett had formed with his editor at Centaur Publications, Lloyd Jacquet (where Everett started in 1938 doing comics that we feature in the Everett Archives). Copies of MPFW only surfaced in the 1970s when Jacquet passed away.

Motion Picture Funnies Weekly #1 had a color cover, but the interior was B&W, and led off with Everett’s Sub-Mariner origin story. Click HERE to view scans of the entire issue (thanks to author Sean Howe for the link), including the back cover drawn by Everett promoting Funnies Inc.'s desire to encourage similar business for the shop. Read through the message board thread and you’ll learn a lot about the history of this key comic book (which we discuss in great length in my Fire & Water Bill Everett biography). When the story was “reprinted” in Marvel Comics #1, Everett expanded it by four pages (the original art to page 12 is featured in the Everett Archives v1) and attempted a coloring process that, in print, didn’t yield the desired results. Seeing the story in B&W only highlights Everett's place in the absolute top tier of creators during the Golden Age of Comics. (Creators, not just pencilers, since Everett was a five-tool player, to use a baseball analogy).

My favorite panels from the story include that stunning bottom panel on pg 2 (the first shot of the diver underwater) and I've always been in love with the "grace" of the final 4 panels of the following page. Page four features the Sub-Mariner crushing the head of the diver - hardly the plain jane origins of a garden variety superhero! On page 6, I love the way he portrays the Sub-Mariner, his mother and the Emperor; such fluidity in that line work. Once Everett gets down to the business of pumping out the strip, and his other work for Funnies Inc., on a monthly basis, we don't see the Sub-Mariner portrayed in this fashion again. And, of course, we get to see history clarified in that last panel on pg. 8 - April 1939 and "continued next week", removed for the expanded version (12 pgs) in Marvel Comics #1. The historical importance of MPFW can never be underestimated, in terms of writing the history of Marvel Comics, the company.

As we point out in the Everett Archives v1, Bill’s style in 1938-39 is very raw and dynamic, compared to this first Sub-Mariner story, until 1940 when that “polish” for which he became famous kicks into high gear on strips like Hydroman. But you can clearly see from these scans why Everett was considered a prodigy. He had artistic talent in spades before he entered comic books and it shines through in the original origin story of the Sub-Mariner in B&W.
Posted by Blake Bell at 11:14 PM 4 comments: 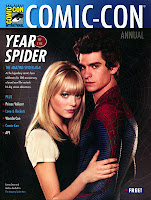 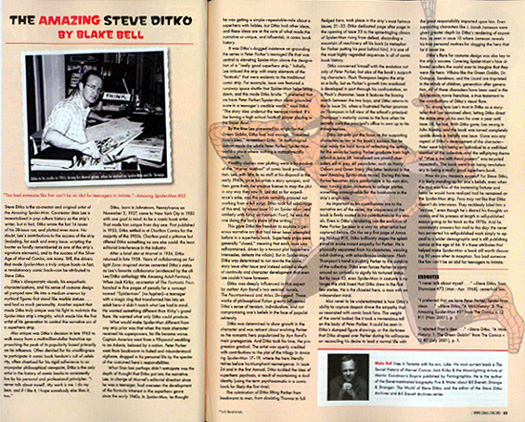