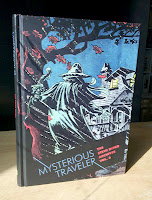 Advance copies of my next book, Mysterious Traveler: The Steve Ditko Archives v3 have arrived at the publisher, Fantagraphics Books Inc. The book is destined for an early May release. This volume features Ditko's best artwork to date, thanks in large part to the copious amounts of stories from Ditko's two best titles of the 1950s, Tales of the Mysterious Traveler (based on the old radio show) and (my favourite) This Magazine is Haunted. The introduction, and insertion, of a narrator in both titles really sees Ditko open up his page layouts beyond a 6 or 9-panel grid.

The 240-page book is all from 1957 (Ditko's output exploding that year to almost 500 pages of pencils and inks; a feat he matched in 1958, as well) and Ditko's line is far more assured than in previous years. This period in his career is unique; he draws heavily on his Eastern European heritage for the ethnicity in his faces, settings, manner of dress, etc. He also developed many of the motifs seen in his 1960s Marvel work during 1957. Click on the above image to see a larger picture of the physical book. Fantagraphics has an 18-page preview on their website (where you can pre-order the book) that shows the immaculate restoration work that has gone into this volume.

You can order the book via Amazon.com at a whopping 38% off the cover price for a limited time. If you're looking for a sample of Steve Ditko's work at its finest, give Mysterious Traveler: The Steve Ditko Archives v3 a look!
Posted by Blake Bell at 8:37 PM 1 comment:

My interview with Josie DeCarlo P3 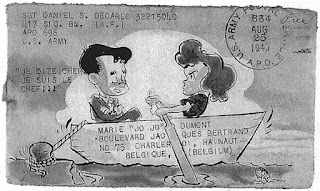 We've come to the end of our celebration of the late Josie and Dan DeCarlo (and what a better way than with the above 1940s piece by Dan; an elaborately-drawn envelope for, no doubt, another love letter to Josie). She will live on in memories and in Dan's artwork, immortalized as the Josie in Dan's creation, "Josie & The Pussycats". Here's Part 1 and here's Part 2. Part 3 finished off the original interview, done for their chapter in my first book, I Have To Live With This Guy!, published by Twomorrows in August 2002, and adds the follow-up questions at the end. RIP Josie...

BB: Stop me if I'm being insensitive here, but financially, with no pension from Archie, are doing okay? Are you and the grand kids doing okay?
Read more »
Posted by Blake Bell at 6:45 AM 4 comments:

My interview with Josie DeCarlo P2 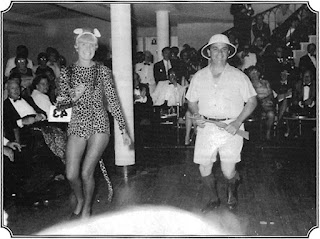 Yesterday, we posted Part 1 of my interview with the late Josie DeCarlo. Josie was the basis for her husband Dan's fictional comic-book rock band "Josie & The Pussycats". The above photo (click to enlarge) is Josie in full pussycats attire on a cruise with Dan. Below is P2 of three of the 18000+ words compiled for their chapter in my first book, I Have To Live With This Guy!, published by Twomorrows in August 2002. I haven't even looked over this, so I'll be reading it with you for the first time in about 10 years (part 3 tomorrow)...


Blake Bell: Now when he was working at home, when the door was closed you wouldn't go anywhere near to his workplace?

Josie DeCarlo: It meant, “don't disturb” when his door was closed.
Read more »
Posted by Blake Bell at 11:42 AM 2 comments:

My interview with Josie DeCarlo P1 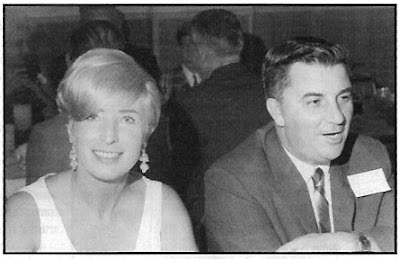 I hate waking up to sad news. Saw a mention on Twitter yesterday and Mark Evanier confirmed it - Josie DeCarlo, the basis for her husband Dan's fictional comic-book rock band "Josie & The Pussycats", has gone to be with the Lord

My interaction with Josie was borne out of my desire to include her in my first book, I Have To Live With This Guy!, published by Twomorrows in August 2002.

I was interested in lining up a diverse list of spouses, from all eras and walks of life, and wanted to feature Dan and Josie mainly because Dan's work was outside the superhero genre. In fact, you could make the argument that Dan's work had been seen by more people than any artist connected to the book.

Dan, of course, was the star Archie Comics artist for decades until 2000 when he decided he deserved a cut of all the money Archie Comics was making off his work (a live-action movie of Josie & The Pussycats was released in 2001 - some projects deserve to fail miserably) and went to war with the corporation.

After coming up with the concept for my book at the 2001 San Diego Comicon, I was able to close the deal with Josie and Dan at a November 2001 convention in New York City. You may not have guessed it from looking at her skinny frame, but that was one strong woman, filled with French passion and conviction...and a strong determination to support and further her husband's career and legacy.

How strong was she? A month after we all met in NYC, Dan passed away far too early, the added stress of a long, draining legal fight not helping. I still remember mulling over that next call to Josie about her participation in the book. Was I being insensitive even suggesting we continue? But, as I said, this was one strong lady and, when we spoke, she absolutely insisted continuing, again focused on continuing her husband's legacy.

And this strong lady had stories to tell! Not just about Dan, or her and Dan, but about an amazing life lived prior to their meeting that no doubt built that strong foundation that Dan so relied on throughout his life and career. Josie came out to the San Diego Comicon in 2002 and was on my panel for the book (a couple of months before publication) with Ann Eisner, Deni Loubert, and Jackie Estrada and Josie stole the show with her harrowing tales of growing up and her fabulous love story with Dan.

(Here's a pic for the ages: Dan on the left, flanked by Jeff Smith of Bone fame, someone unknown over Josie, then Sergio Aragones and Will Eisner on your far right at the San Diego Comicon 2001. Click to enlarge.) 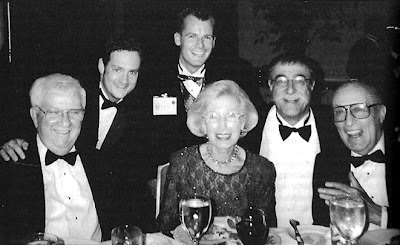 It's terribly sad to reflect on how many of these I am writing, having posted the Adrienne Colan chapter when she passed away last year. We've also lost Muriel Kubert in 2008, as well as husbands Will Eisner in 2005 and Ric Estrada in 2009. Praise God for those who remain in good health and we wish them long lives.

So let's celebrate Josie DeCarlo's life a little differently. Her story is so impressive, and I have 18000+ words (34 pages of single-space text!) from our conversations together, so I am going to publish the whole interview, versus the chapter in the book. Generally, I've preferred to go with a revised version of the chapter, because I added in a lot of context, but I so love Josie's story that we'll let her tell it, in three parts starting tonight. Lots of talk about Archie, of course, but also around Dan's time working with Stan Lee, and for Martin Goodman's Humorama magazine. Click on the "Read more" to view the entire text.  RIP Josie...

Blake Bell - I’m speaking to Josie DeCarlo on Sunday March 17th from her home. Josie, I was first interested in talking a little bit about your family background, where you grew up and what it was like to grow up in Belgium, if that’s exactly where you grew up?

God's blessings just keep raining down on my life in 2012. Just found out today that my Unexplored Worlds: The Steve Ditko Archives v2 book has not only been translated into Spanish, but is out in stores today (under the title Mundos Inexplorados: Los Archivos Steve Ditko v2).

Diábolo Ediciones is the Spanish publisher and if they sound familiar it is because they also translated and published Strange Suspense: The Steve Ditko Archives v1 in December of 2010. Click here to view the publisher's listing for volume one that has 3 pages of pre-code Ditko in Spanish!

Perfect timing is this as we ramp up for the English publication of Mysterious Traveler: The Steve Ditko Archives v3 in May! Click here to pre-order it from Amazon.com at 38% off the cover price. Click on the image below for a larger version of the front, spine and back Spanish cover to v2, which you can purchase at Spain's Amazon site. 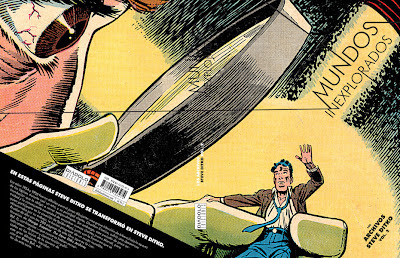