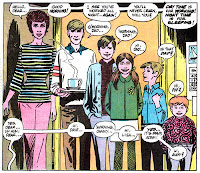 Yesterday, we published the first half of my 2002 interview with the late Muriel Kubert for my firsts book, "I Have To Live With This Guy!", on life with her husband, the recently departed Joe Kubert.

Below is part two, including the follow-up questions and my interview with Joe about Muriel and her contributions to the family, to his career, and to their school for cartoonists. God bless them both. Few leave such a legacy, few have such an impact on so many in the business.


BB: What is the experience like, to be able to first open that thing (the Kubert School)?

MK: Exciting. It's still exciting. You look around and you look in the comic books. Sometimes I'll take a look in the Buyer’s Guide - very rarely - and I'll see the names of our kids. It's really something. And we have international students too. There's one boy, that I used to call my Nigerian son, he's now the top political cartoonist in England. It's wild. It really is.

MK: I don't know about all 22 of them. There was Rick Veitch. There was Steve Bissette. There was John Totleben, or did he come a little bit later?

BB: They all still hang together, the three you just mentioned. They all hit Swamp Thing at one point or another. They all traded off from each other. Are those some of the guys that stand out?

MK: Tom Yeates. I’m trying to remember the names. It's going back, what, 26 years?

BB: Once the school is open, what are you doing the school?

MK: I was there all day. Early in the morning until school closed, I think we closed at 4:30. I love to cook, but at that period of our lives, we opened up a charge account at the diner because I didn’t have time to cook.
Read more »
Posted by Blake Bell at 7:21 PM No comments:

Email ThisBlogThis!Share to TwitterShare to FacebookShare to Pinterest
Labels: I Have To Live With This Guy, Joe Kubert, Muriel Kubert

Muriel Kubert passed away in 2008 after 57 years of marriage to her husband, Joe Kubert, who has now joined her in Heaven. I had the distinction pleasuring of having Muriel and Joe participate in my first book, "I Have To Live With This Guy!", back in 2002. She was a strong woman, knew her business, was protective of her family and their legacy (five children; two, Adam and Andy, important artists in their own right), and an integral part of the Kubert School that has produced many great cartoonists during its now 36+ years in business.

In my book, I combined the Kuberts in a chapter with Stan & Joanie Lee, as well as Will and Ann Eisner. All three were examples of men, and families, who broke the mold, in terms of finding success in the industry that was accomplished beyond the pen. All three men were good businessmen, and good salesmen.

Originally, my book was going to be nothing but interviews, but I wanted to provide more context, so I went the prose route. So, here, for the first time, is the entirety of the Muriel Kubert transcript (edited afterwards by her), in two parts. We'll publish part two tomorrow night, which includes the follow-up questions and my interview with Joe about his wife and her importance in his business and their family (read onwards after the jump break).

Muriel Kubert interview
by phone from New Jersey
for “I Have To Live With This Guy!”


Blake Bell: I'm speaking to Muriel Kubert on Thursday, March 7th, 2002. Muriel, I was wondering if you could tell me a little bit about your background; your family background; where you grew up.

BB: Now, when you say small, how small?

MK: At that time, maybe five thousand people. My dad had a small supermarket there – Fogelson’s Super Market. I went to Booton High. I went to Rider College after that. Got a B.S. in business administration.
Read more »
Posted by Blake Bell at 8:18 PM No comments:

Email ThisBlogThis!Share to TwitterShare to FacebookShare to Pinterest
Labels: I Have To Live With This Guy, Joe Kubert, Muriel Kubert

Renowned comic-book artist Joe Kubert passed away this week at the age of 85, leaving behind a remarkable legacy: 70 prolific years of cartooning that has influenced generations; a school that continues to produce comic-book artists; and two sons that have made their own name in the field.

Amongst those influenced by Kubert’s drawing style and storytelling was a young Steve Ditko, almost 10 years before he would co-create the Amazing Spider-Man. Ditko was first published in 1953 and there are numerous examples in that first formative year where the Kubert influence is quite clear. It dissipated during the latter half of the 1950s, but did pop up on occasion.

“One of the first things I recall about seeing Captain Atom,”said Roy Thomas (writer, then editor at Marvel concurrent with Ditko’s tenure), “is the resemblance of Ditko’s faces to Kubert’s 1954 comic, Tor.”

It’s one thing to draw faces similar to another artist, but it’s another to be influenced by how said artist lays out his page. Below, if I didn’t tell you which is which, you may have challenges telling the difference. On your left is Ditko’s Black Magic #28, cover dated Jan ’54. On your left is Kubert’s Witchcraft #1, cover-dated Mar/Apr ’52. Note the very striking similarities in choices of staging, perspective and lighting (click to enlarge, and open both side by side)...

Ditko is also famous for his rendering of disembodied mouths/faces harassing either Spider-Man, Dr. Strange, or some harrowed figure from his pre-hero Marvel work. But, as you can see below, Ditko may have caught a glimpse of Kubert when designing that motif.

Below is a Ditko splash to one of his first works: The Thing! #13, Apr ’54. Dave Sim, creator of Cerebus, and a devotee of Kubert, said (when I sent him a pile of 1950s/60s Ditko), “The really interesting thing about this one, and something that I had never seen before, is the similarity of Steve Ditko’s early drawing style to Joe Kubert’s work. It’s particularly noticeable in Ken’s posture in panel 2 on page one, Allen’s face in the next panel, Ken’s figure in the last panel on page 4, the panel where Ken and Marion Welles meet for the first time on page 5. (Sim also noted that “same Kubert look” in Ditko’s ‘The Vanishing Martians’ from Marvel Tales #147, Jun ‘56.)

What is interesting about the connection between the two is the friction it created when mentioned. At one of my Steve Ditko panels in the past 10 years (I think at a San Diego Comicon), a member of the Kubert School told the story about when he mentioned to Kubert the resemblance and Kubert shut down on him big time. Fantagraphics co-publisher, Gary Groth, also one of my panels, mentioned that he tried to address the matter with Kubert but was rebuffed.

I don’t believe Ditko has ever mentioned Kubert (although Ditko has only ever mentioned Robinson as a direct influence, because of their teacher/student relationship), and I don’t think Kubert is in print addressing the matter at any length.

Nonetheless, Ditko is one of many artists in the comic-book field that was influenced by Kubert. Both men’s legacies are secured, and Kubert’s influence on the industry as a whole is seen this week in the number of tributes documented by industry peers, and non-industry media outlets. 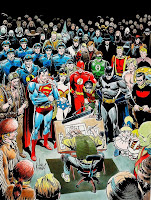 Comic-book legend Joe Kubert has passed away at the age of 85. His first published work dates back to 1942 and he was going strong to this day. His catalog of work is extraordinary, as is the quality of the work from start to finish, a true rarity. He also left a huge legacy on three other fronts: he influenced a number of artists, including a young Steve Ditko back in the early 1950s (Ditko's earliest work in 1953-54 bares a remarkable resemblance to Kubert, not just in how Ditko drew his faces, but in how he laid out a page and how he set up a panel).

Kubert also influenced generations of artists through the Kubert school, and through his two sons, Andy and Adam, who have gone onto great heights in the industry as artists.

My association with Joe began in late 2001 when I convinced his lovely wife, the late Muriel Kubert, to participate in my first book, "I Have To Live With This Guy!" that was published by TwoMorrows in 2002. Muriel was a very strong woman, no-nonsense, and a strong force in the Kubert School.

To promote the book, I hosted a "Joe and Adam Kubert" Panel at a Toronto Comicon on August 24, 2002 (in the front row was Dave Sim, who disappeared with Joe after the panel to talk about the school, etc.). Here's a (long) transcript of the panel after the jump. God bless you, Joe, as you join Muriel in Heaven...

Email ThisBlogThis!Share to TwitterShare to FacebookShare to Pinterest
Labels: Adam Kubert, I Have To Live With This Guy, Joe Kubert, Steve Ditko
Newer Posts Older Posts Home
Subscribe to: Posts (Atom)
Click to Purchase My Books