Remember in my previous post, on my memories of Fantagraphics co-publisher, Kim Thompson, who passed away last week, where I mentioned my first meeting with Kim?

Well, here's a segment of the "Origins Of Fantagraphics" video - featuring Mike Catron on your left, Gary Groth in the centre, and Kim Thompson on your right - from the 2001 San Diego Comic-Con.

The man manning the camera? A much younger version of me. It was right after this panel that Mike Catron (for whose camera I was manning) introduced me to both Kim and Gary.

Nice stuff. Haven't seen this since it was shot. 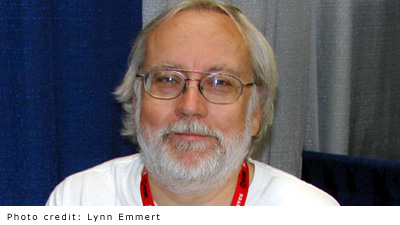 I think that you’ve lived a life worth living if you:

There are plenty of other people who knew Kim Thompson better and for longer, who worked closer with and lived closer to him, but I think I knew well enough and worked with him long enough to say with good certainty that Kim nailed it on all four of the above points.

For those unaware, Kim Thompson is the co-publisher of Fantagraphics Books Inc., alongside his friend and business partner of 35+ years, Gary Groth. Kim passed away Wednesday, after a short battle with cancer, and I count myself blessed to have worked with both men, almost exclusively with Kim for the past two-and-a-half years on what will total nine books by the end of 2013 with their company.

The first thought that comes to mind when I think, “Kim Thompson!” is that the man was blessed to have spent his entire professional life doing what he loved – working in the comic-book field, producing a ton of quality comic books and graphic novels (including a number of translations, and “foreign” artists that may never have seen North American shores without Kim’s efforts).

Like, he got to do it full-time. For a living. That’s frickin’ cool.

I met Kim for the first time at the San Diego Comic-Con in 2001. More on that a little later, but I remember sitting there at the Eisner Awards that year, just dreaming about one day being able to be a working part of the industry, enthralled by the love of the medium that was present in that room.