More Secrets from the History of Marvel Comics

We're rushing to the end of the production cycle of the Secret History of Marvel Comics, from myself and noted 1930s-50s historian Dr. Michael J. Vassallo, published by Fantagraphics Books, Inc.

Today, I'm adding to the captions list because, even after we submitted the design mock-up for the book back in late August, we're still coming up with potential new additions to our 300-page tome.

The book's all about the earliest days of Marvel Comics owner Martin Goodman and the Golden Age Marvel artists like Jack Kirby et al. who crossed over to do work in Goodman's other businesses. Since we thought we had closed the book on the design, we've uncovered two new pictures of Martin Goodman from the 1950s that are buried in his magazine line, including a nifty one with Charlton Heston from 1953.

This picture would have been taken just right after Heston's breakthrough role in The Greatest Show on Earth that won the Oscar for best picture of 1952. It was also three years before Heston played Moses in The Ten Commandments and six before he played Ben-Hur and won the Oscar for best actor. But, there he is, sitting with Goodman at Gogi La Rue's in New York City. The other picture has Goodman on a horse wearing a cowboy hat!

Our book won't make the Christmas rush, but that's what you get when you expand the scope of a book from 168 pages to 300! And we're still getting more artwork and Goodman magazines in that we never knew existed. (Finally nailed a copy of that Zippy mag with the Joe Simon cover, plus an Elvis magazine cover from 1957!) Just how many titles did that man produce? And you thought he flooded the market with his comics?
Posted by Blake Bell at 12:38 PM 2 comments:

The Devil made him do it. 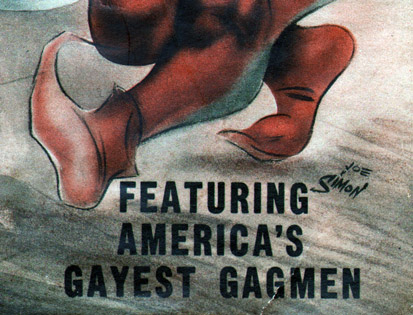