Intro. to Bill Everett Archives v1 off to the publisher today! 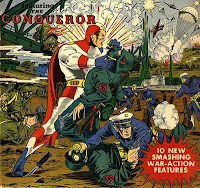 Whoever said "half of writing is rewriting" I don't think got their percentages quite right. Today, I'm sending to my publisher, Fantagraphics, the completed introductory essay to my upcoming book, Amazing Mysteries: The Bill Everett Archives v1, that will make its debut at this year's San Diego Comicon. The book collects Bill Everett's non-Marvel Comics work from 1938-42 for the first time.

So, other than writing this blog post, what do you think I'd be doing today? Surely not rewriting a 335-word passage at the 500-word mark of this 5000-word essay, right?

Well, you'd be wrong. In giving the introduction one final read, I wasn't happy with this 335-word section that speaks to the evolution of sequential art in the 19th century, the comic strip, and the influence of the Hearst/Pulitzer newspapers. Thankfully, in part, by just moving some elements around, it reads more clearly and makes its point more succinctly.

Lots of people use the first appearance of Superman in 1938, or Marvel Comics #1 in 1939 (featuring Bill Everett's The Sub-Mariner), as the landmark in comic-book history and they certainly are key in the history of the super-hero, but Bill Everett's beginnings in the comic-book industry pre-date both events. His career can be viewed as a bridge between the evolution of the comic-book form and the whirlwind of superhero comic books that led the charge into World War II. We explore the connections in essay and I've been rewriting it until I've gotten it right...which I've hopefully done this morning!
Posted by Blake Bell at 11:05 AM