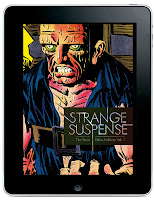 Following that is the B&W stat of the original art before production was finished. 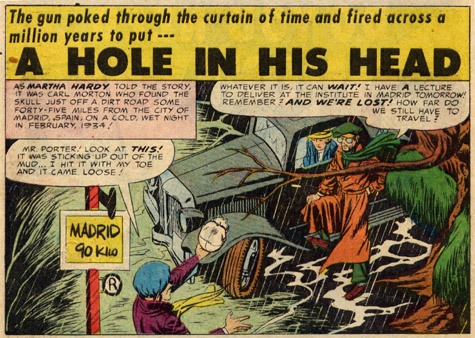 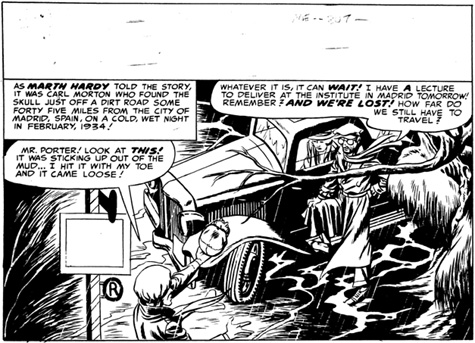 It's unrealistic to think that there wasn't a story title before the whole story was put together, but it looks like it was a paste-up added later, doesn't it? It's tough to make out those letters near the top on the right. Looks like "ANE -- BU7". (Anyone have a suggestion?)

Notice also the signpost! "Madrid 90 kilo" is missing on the B&W stat. It's not like Madrid wasn't already identified as the destination in the text right in that first panel. And in the 2nd panel (not seen here), they mention the 90 kilos on the signpost.

But the most fun comes from the last page of the story. Spoilers: These three characters find a skull with a hole in its seemingly-neanderthal head. They then get into a fight over the woman, fall into a pit, which takes them back into time where one of the men shoot the neanderthal in the head, and they all go crazy realizing the paradox. Only the woman escapes with her life, leading to the last two panels in the story...except that in the printed version, there is no last panel... 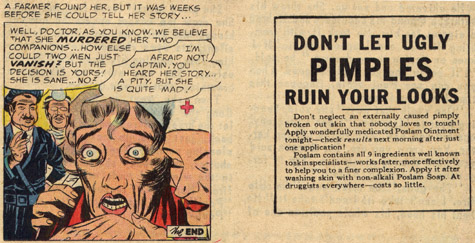 ...there's just the oddity of that pimple ointment panel. But, okay, there's a "The End" box in that first panel, so it must have been the end of the story, right? Not so fast. Here's the B&W stat of the same... 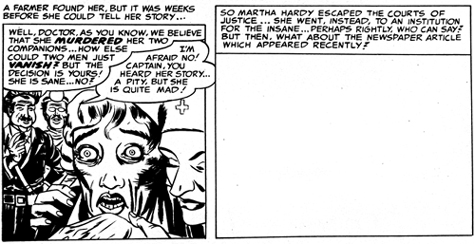 Now, as Nick Caputo says in his blog post, Ditko did these early Black Magic stories for the Joe Simon and Jack Kirby studio. Those two packaged comics for other publishers, so they'd go over each story from the artists who did work for the studio and, if they didn't think something would help sell the comic, they'd make changes in story and art.

It's probably safe to say that the writer of this story had the last panel with a newspaper article and Ditko and/or Ben Oda, the letterer tried to reproduce the look of a newspaper. Clearly, though, Simon or Kirby didn't like it enough; enough to wipe out the whole panel! But don't you want to know that article said? Perhaps the skull was found, but buried in a little story that no one noticed?

Clearly, Simon/Kirby thought the presentation of the last panel was so weak that they were willing to toss the "twist ending" and just leave it at the woman as having gone insane. (Wonder how much money they made, if any, off of the placement of that pimple ad? Probably seemed like a good trade at the time. They most definitely didn't think some Canadian and a New Yorker would be examining this stuff 60 years later!)

Lots of mysteries and stories can be found in the digital/print version of Strange Suspense: The Steve Ditko Archives vol. 1. Get yours today.