Well, I was going to do an update on why you should purchase "Heroic Tales: The Bill Everett Archives vol. 2" (on sale now directly from Fantagraphics; in stores in the next 2 weeks), but how about your first look at the new cover for "Impossible Tales: The Steve Ditko Archives vol. 4!" (At a book a week, maybe you'll get news on our "Secret History Of Marvel Comics" book next!)

You click on the image above, or to see the entire wraparound cover, click on the image below. This latest volume of Ditko goodness - continuing the exhibition of his 1957 work - should be available in early October! Fantagraphics always gets their mail-order copies out first, so you can pre-order from them right now at this link on their website.

Five years before Steve Ditko began work on his co-creations for Marvel Comics, the Amazing Spider-Man and Doctor Strange, he was producing his best work in near anonymity for Charlton Comics. “Impossible Tales: The Steve Ditko Archives V4” features over 200 full-color pages of Ditko in his early prime. These are stories that have never seen a proper reprinting until now; thrilling stories of suspense, mystery, haunted houses, and unsuspecting victims all led into Ditko’s web of artistic mastery over the comic-book form.

This fourth volume ranks as the most superior in the Archives series to date because of the inspiration Ditko took from comics related to old radio shows and that had hosts who narrated the tales. This Magazine is Haunted and Tales of The Mysterious Traveler saw an explosion in Ditko’s ingenuity with manipulating the traditional comic-book page layout. This level of excellence was also present in his work on other books like Mysteries of Unexplored Worlds, Out of This World, Strange Suspense Stories, and Unusual Tales, marking this fourth volume as the best example yet of the Steve Ditko that later crafted iconic classics with Stan Lee at Marvel Comics in the 1960s. 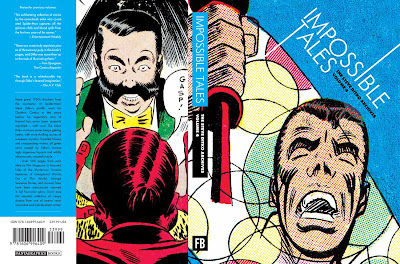