Anyone who says "half of writing is rewriting" is about one-third correct. Today is a good example of that. I was set to hand in the introduction for my next book, "Outer Limits: The Steve Ditko Archives volume 6" (to be published by Fantagraphics Books, Inc.), so I sat down in front of my computer for one last read...and then completely tore up the first twenty percent.

I still plan on getting it out today, and that should close down my work on this one. I would guess-timate that it will be in stores come March 2016. (Book #12 for l'il old me.)

This volume should be of particular interest to all Ditko fans, because it's really the close of the first (big) chapter of his career (1953-59). The work represented in the 200 pages of remastered Charlton Comics artwork lands in the second half of 1958 time frame, just when Ditko is headed back to Marvel Comics and Stan Lee. Sure, it would be another four years until the two men would create Spider-Man, but the groundwork for their working methodology (i.e., the "Marvel Method"), and its seeds of discontent, are first sown during this period.

I say that the work within volume six represent closure on that first big chapter of Ditko's career also because the final stories mark the first unbroken string of work provided by Charlton Comics since late 1956. Ditko would focus on Marvel work exclusively for about 6 months before pulling double-duty with both companies...and on Ditko's first superhero character, Captain Atom (a Charlton comic, not a Marvel one).

But it isn't just the shift in narrative focus; the stylings of the work also takes a turn once he starts at Marvel. And it appears in that "second phase" of his Charlton work too.

Of course, all of this plays out in a Manhattan studio that Ditko started to share with Eric Stanton, the (in)famous fetish artist, in 1958, as well. If that isn't enough of a dichotomy - the buttoned-down, straight-laced, shy Ditko stepping over half-naked models, bound and gagged on his studio floor - then imagine Ditko the superhero artist dipping his pen into the murky ink of Stanton's pornography. Explain that one, Ayn Rand!

We explain it all in "Outer Limits: The Steve Ditko Archives volume 6", out in stores ~March 2016. 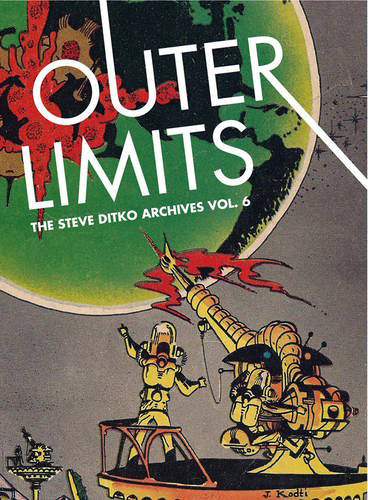