My Bill Everett book nominated for an Eisner Award 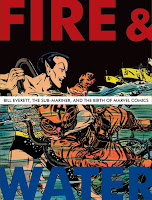 I’ve been so busy working on my next book, Amazing Mysteries: The Bill Everett Archives v1, and beginning work on the third volume of The Steve Ditko Archives that I haven’t even had the time to acknowledge here that my Bill Everett biography/art book from 2010, Fire & Water, received an Eisner Awards nomination for Best Comics-Related Book. The Eisners are the comic-book version of the Oscars/Academy Awards, named after Will Eisner, one of the comics medium pioneers who created The Spirit newspaper strip back in 1940 and is considered the “Godfather of the Graphic Novel”. It’s his seminal book A Contract With God that many point to as the tipping point for a change in the delivery model for sequential art from “floppies” towards the graphic novel format that dominates today.

10 years ago, at the 2001 San Diego Comicon (my first convention outside of Canada), I attended the Eisner Awards and it’s a moment I’ve never forgotten. Why? Well, the event was the culmination of being submersed in the “Comicon Experience” (back when the emphasis on comics was much stronger). My first article had been published at the show (on Steve Ditko in Comic Book Artist) and I had already been “star struck” from meeting many of the artists and writers I had admired for the first time, attending panels, and also buying more comics than I could likely afford. And, a few weeks before on July 4th, I had launched the official (yep, Steve Ditko had sanctioned it) web site for Ditko and his co-publishers to sell their wares on the Internet and get their message out. That attracted some professional ears, leading to my first meeting with my soon-to-be-(co)publisher, Gary Groth (of Fantagraphics), as well as Mike Catron (who had co-founded The Comics Journal with Gary back in the day) who I helped with some filming of the various panels.

But it was at the Eisner Awards where I sat and watched Jill Thompson win everything and she ran up to the stage effervescently to great cheering and I thought to myself, “I’d give my teeth to be a part of this industry.” Dave Sim’s “you’ve got 2000 bad pages in you, so get them out first” words rang in my ears, so I knew my entry into the industry likely wasn’t going to come producing comic books but instead through the documentation of their history and in showcasing the careers of the creators within.

At that ceremony, the sense of appreciation for the effort and sheer force of will and determination that it takes to produce quality work in the comic-book medium was palpable. I grew up having such an appreciation for the medium and those who toiled in it that, on this night, that feeling of wanting to be a part of the industry was probably what remains as the most salient emotion from my Comicon Experience.

That night would also launch my book-writing career. Mike Catron grabbed me after the Eisners was over and introduced me around to every luminary he knew and, as I watched the patient spouses of these creators tell their tall tales, I came up with the idea for my first book, I Have To Live With This Guy! (thinking that these women must know the real story of these creators who work in such solitary confines) and sold it to TwoMorrows the next morning. Thirteen months later, I was holding a volume in my hands featuring in-depth interviews with Will and Ann Eisner, as well as Stan and Joanie Lee, Alan Moore and Melinda Gebbie, Howard Cruse and Ed Sebarbaum, and on the list went on.

So, to see a book on Bill Everett receive recognition at the Eisners is a satisfying signpost in my journey as a writer in this industry. Everett passed away before I was even three years old, but I hope his family – who were instrumental in making the book more than just a nice picture book – appreciate the recognition too.

Click HERE to see the full list of Eisner 2011 nominees. The Awards are held in conjunction with the San Diego Comicon this July (the awards show itself on Fri Jul 22). The other nominees are a daunting group:
Thank you to the Eisners nominating committee, to Fantagraphics for publishing the book, and to the Everett family for all they offered to make it a worthy work.
Posted by Blake Bell at 12:28 PM

Email ThisBlogThis!Share to TwitterShare to FacebookShare to Pinterest
Labels: Bill Everett, Fire and Water, I Have To Live With This Guy, Steve Ditko, Steve Ditko Archives