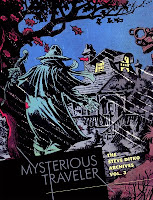 Another reason this volume ranks as the most superior in the Archives series to date is the inspiration Ditko took from comics related to old radio shows and that had hosts who narrated the tales. Comics like Tales of The Mysterious Traveler and This Magazine is Haunted saw an explosion in Ditko’s ingenuity with manipulating the traditional comic-book page layout. This filtered over to his work on other books like Mysteries of Unexplored Worlds, Out of This World, Strange Suspense Stories, and Unusual Tales marking this third volume as the best example yet of the Steve Ditko that would later craft with Stan Lee at Marvel Comics in the 1960s.
Posted by Blake Bell at 11:41 PM