Bill Everett Book News Page, P1 of "DVDs That Will Be Mine!" 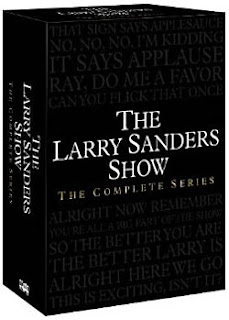 As we await audio of my Bill Everett and Howard Cruse panels from this year's San Diego Comicon (click here for Tom Spurgeon's The Comic Reporter site's "Collective Memory" entry that collects all the SD reports he's sent), I took the time to set up a Bill Everett News Page; a centralized place on this Blog that will house all upcoming information, reviews and appearances about my Bill Everett book (so far it includes the Amazon.com link to pre-order my book, and all my San Diego reports in one place). So bookmark this page and come back often!

In part one of an ongoing series entitled "DVDs That Will Be Mine!" (subtitled "And They Should Be Yours Too!"), we continue to explore what we discovered at the San Diego Comicon. I happened upon the Shout Factory! booth (the company that brought you the My So-Called Life and Freaks & Geeks on DVD) and discovered an upcoming gem - The Larry Sanders Show: The Complete Series. Yes, not just Season 1, which we've all had to date, but all the seasons. Their catalog said September 14, 2010, even though the Amazon.com list date is November 2.

The Larry Sanders Show, starring stand-up comedian Garry Shandling, began airing in 1992 on HBO and it set the standard for what the Cable TV world would offer over Network TV and the schism created never healed. As the Wiki entry says, "The show revolves around Larry Sanders, (Garry Shandling) host of the fictional late night talk show The Larry Sanders Show. It chronicles the daily life of Larry; the show's producer, Arthur "Artie" (Rip Torn); Larry's sidekick, Hank (Jeffrey Tambor); and the production staff, as they attempt to produce a successful talk show each night while dealing with celebrities, the network and everything in between." Tambor was a revelation and the writing was beyond whip-smart, better revealing the inside world of a talk show that any reality TV show could hope to produce.

Click HERE for host of YouTube videos that will give you a taste of the magic that was the six seasons of the show.  If I put together a list of my Top Ten Comedies ever, this would be in competition without a doubt. There are so many classic moments - the both-late-of-this-world John Ritter and Gene Siskel going at it over John's movie career; the Hankercizer 200 (who numbers a product with only 3 digits? Hank Kingsley, of course); the Penis/Vagina Hank's Thoughts newsletter entry - and one of my favourites has to be the diss by Larry of the also now-departed Ray Combs, then host of the Family Feud, when Combs invites Larry out to dinner. Shandling's delivery in the scene is classic. Buy the Complete Series and find it! No regrets, guaranteed!
Posted by Blake Bell at 7:47 PM