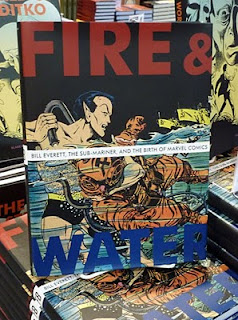 Preview Night at the San Diego Comicon ended only 10 hours ago (I forgot that sleep here when you have a book debuting is not a necessity) and, while not surprising, 3 hours is barely enough to take in but a few square feet of the show and the experience. I didn't even try. I had two goals: plug some Ditko holes for the next couple volumes of The Steve Ditko Archives (not v2 - that's "in the can" already), and circle the Fantagraphics Booth until I was ready to see my Bill Everett book in the flesh for the first time ever.

I was successful - extremely successful - on the Ditko goal (surprised at the quality of the comics this year - as comic dealers fade away or reduce their booth size - I thought I'd have challenges) and I'm posting some pictures here (link below) that reflect how little geographical space I actually covered last night. I arrived in town at 4:30pm, a fairly uneventful flight, and whizzed through the registration process well enough. This year, as I did in 2002, I'm rooming with long-time (super long-time) comic-book retailer and pre-Golden Age comic-book historian Robert Beerbohm at the Marriot attached to the Convention Centre, so that's extremely convenient.

I started at his table, knowing the Fantagraphics booth was lurking out there somewhere (Booth #1718), but then executed my plan of roaming the comic dealers methodically, starting on the north wall, heading west, then back in a row, but I ended up with so many books that I barely made it inwards by one row, stopping at Terry's Comics (who has a Fantastic Fears #5, CGCed at 3.5, for around $500 - this being Steve Ditko's first drawn story; not first published, mind you) before I realized time was getting away from me and I better head over to the Fanta booth.

As you can see in the photos, they had my Everett book stacked high at the corner of the booth, facing the main aisle, racked with my other two (Ditko) books. The cover of the Everett book really "pops" from a fair distance. An interesting feeling, having conceived of this project two years at the '08 San Diego Comicon, and having spent almost every waking minute since mid-December bringing it to fruition, to finally hold the book in my hands last night. Via text from Toronto, my best friend, Len Lumbers (and Ditko/Everett fan himself) and I were reminiscing about being in the Upper Canada College library back in 1983, when we were 12 years old and discovering Everett in the couple of comic-book related history books they had. That launched our fascination with Everett, and here we are in 2010, with both my Ditko and Everett books having seen the light of day.

Given all the activity swirling around the booth, I didn't actually have a great deal of time to leaf through the book, but I really wanted to see how the first two chapters (the pre-Marvel Comics #1 chapters) came out because they had so much unpublished artwork, including a 1937 sketchbook by Bill that's phenomenal and, blown up to full 9x12 pages, it looks stunning. Long-time retailer Bud Plant was very impressed with the book and that's saying something.

What will be truly special is the arrival of Wendy Everett tomorrow and being able to hand her a copy of the book about her Dad. Bill passed away suddenly in his 50s back in 1973 and 37 years later, interest in her father's work has never been higher. We're doing a Friday 6pm signing at the Fantagraphics booth and then a Saturday 5:30pm panel together. It's a unique opportunity so I hope everyone will come out.

I suspect that, after today, I'll be able to offer up more on the actual show itself. When I came for the release of my Ditko book back in 2008, I hadn't been to the show since 2003 and, again not too surprisingly, I lamented the reduction in comic-book dealers, in Golden and Silver Age artists attending (compared to my first show in 2001), but was sad to see that comics (which used to be grouped together) had literally been separated and pushed out to the four corners of the show. When I was walking around on Sunday in one of those corners, I came across a whole bunch of "hidden" dealers that I hadn't found in the previous days of the show, and it'll be interesting to walk the whole show today and tomorrow and get an environmental scan of the show in 2010. I did get a chance to re-make acquaintances with my first publisher, John Morrow, of TwoMorrows, and shook hands again with Eisner Award-nominated blogger, Tom Spurgeon, he of the site The Comics Reporter.

Off today to do a 5pm signing at the booth and a 3:30pm panel that I'm moderating: "Spotlight On Howard Cruse". I've posted Wednesday's photos here on my Bill Everett Facebook page, but have made them public for all to see. I suspect a Flicker account or something like that is in my future. The Flog! Blog on the Fantagraphics site also has pics. More on today tonight!
Posted by Blake Bell at 10:40 AM