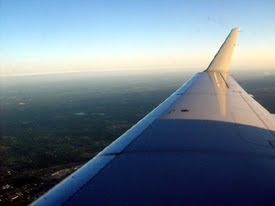 Miscellaneous items and thoughts from this year's San Diego Comicon:
Gene Colan wins at the Eisner Awards for "Best Single Issue", sharing with writer Ed Brubaker for Captain America #601. No one more deserving than the brilliant artist now in his 60th year in the business!
I was delayed and showed up at the Eisners with four awards to go, and it was quite depressing (compared to my first in 2001). There were more professionals at the tables up front than were in the audience, and there weren't that many at those tables. And the after party was barely attended. I haven't been to the Eisners since 2003 and I hope this year was an aberration.
Delta trumps Continental because of its in flight Internet service (and cheaper baggage fees), but Continental gives complimentary meals instead of snacks, even on shorter flights.
Still waiting on audio from my Bill Everett panel (with daughter Wendy Everett), my Howard Cruse panel, and my interview with Chris Rosa of Meltdown Comics (for their Meltcast podcasts). 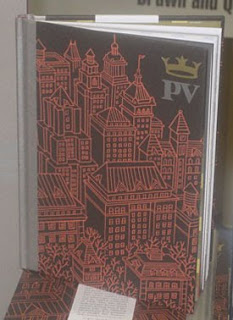 Stayed away from buying books that would interfere with my ability to get on a plane without checked baggage. The one exception was (and will always be) Seth's latest, Palookaville #20. Every issue of this good Canadian boy's output is a visual and physical delight, and this year tops every previous issue with its new format. The promo piece for this issue states "Palookaville #20 is the first volume of the seminal comic book series to be published in book form...Seth’s first autobiographical comics since Palookaville #2 and #3 will be featured in #20. Drawing in his loose sketchbook style, similar to his book Wimbledon Green, Seth details his trip to a book festival and his awkward struggle to overcome isolation and communicate with the people around him. Seth continues the serialization of his acclaimed Clyde Fans story line, about which The New York Times Book Review aptly noted, “Seth truly believes in his wares—the little meanings of regular lives.”
I had great fun at this year's show, owing mostly to the debut of my Bill Everett book, but I have to lament the lack of panels that interested me this year, especially compared to my first year at the show in 2001. This is especially true concerning Golden and Silver Age comic-book greats. I know this is, in part, a function of age, but the 2001 Con had everyone I ever wanted to see: Gene Colan, John Romita, John Buscema and it just went on and on. I think, however, it's also a function of the increased expense of attending a Con for an artist and the increasingly limited return on investment for anything comic-book related at the show. I hope this was just a bad year, but not many of my favourite current artists were in attendance, and some had reason to be there. But an artist's presence has to increase sales a great deal (as opposed to how many would sell anyway if they didn't attend) to justify the expense to the artist, so I understand it, but that doesn't make coming to San Diego any less of a value proposition for a consumer hoping to have an experience superior to walking into their local comic store. 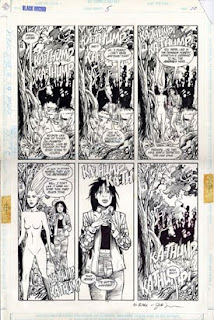 I made a conscious choice at the end of the 1990s to steer away from original art so that I could buy 1950s Ditko and Timely/Atlas books, but I'm getting the itch again. Other than a few sketches, I only own a few Sam Glanzman pieces, but couldn't resist adding the piece to your right.
I loved Jill Thompson's take on Black Orchid in the 1990s and was able to tell her so at my first San Diego Comicon in 2001 (the year she won a fist full of Eisners). This year, I passed her booth and she was selling pages for only $60 (Nice!) Granted, almost all didn't have the Orchid in them, but this was the best by far of the bunch. Love the blacks in the first row of panels and the characters in the second row are large enough to make this a welcome addition for the price. Off to pursue a Hernandez and Seth piece now.
Did you know that Sparkplug Comics not only publishes Reich by Elijah Brubaker and Report by Dylan Williams (with a nice Mr. A nod on the inside cover of #6), but that, every year at the San Diego Comicon, they bring the latest self-published Steve Ditko material (Ditko is up to, what, eight new 32-page comic books since 2008)? Well, you do now.

Lastly, I'm glad I didn't attend Sunday (and not just because all three of my books had sold out by Saturday). It's kind of a sad day, saying goodbye to people you may not see again for one or two years, and I think general "Con fatigue" sets in. "Leave wanting more" than the opposite is a good way to look at it. Next year, I'll enhance the experience by bringing my (then) 11-year old son, Luke, and we'll do a whole week in San Diego, so that it's not just about the Con (looking forward to the Zoo, a ball game, and a beach - how novel to be out on the town during the day, instead of inside the Con walls 24/7).
Posted by Blake Bell at 8:02 PM