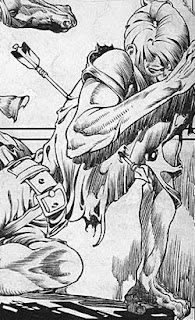 Is there a strong enough market for a Lou Fine art book/biography like my Bill Everett and Steve Ditko books? Maybe/maybe not, but one of the joys of attending the San Diego Comicon is patrolling the original comic-book art dealers and seeing the odd 1940s piece of artwork that makes your jaw drop when compared to the printed version. Few artists back in the day were in Bill Everett's class, but Lou Fine is certainly one of them and the cheap printing back in the Golden Age of Comics didn't do justice to the man's line work.

Fine joined the comic-book field around the same time as Bill Everett, in 1938, Fine winding up at the Will Eisner-Jerry Iger studio. Fine would work on Eisner's The Spirit newspaper strip while Will was away during WWII, but Fine was out of comics by the end of the War.

That's a shame because this Black Condor piece of original art was on display at Mike Burkey's booth in San Diego and even the nice scan doesn't do the line work justice. Just beautiful penmanship. Joe Simon has been quoted as saying Fine was an influence on the great Jack Kirby, so you can't do much better than that.

Here's more on Fine's life, and here's his Google gallery of images. Here's another piece of Fine original art on Burkey's site and an example of his work on The Spirit. When I think of great comic-book artists from this era of comics that were true artists, I think of Everett, Fine, Basil Wolverton, Bob Powell and Matt Baker, just off the top of my head.

Another piece of art that I saw in San Diego reminded me that there's nothing like looking at the originals compared to the printed version. Here's an Alex Raymond Flash Gordon piece which, like the Fine, piece has exquisite line work.

So, what do you say, people? Should I do up a nice book on Lou Fine? If so, I'd have to get a hold of as much original artwork to show off his glory. Please leave your thoughts below.
Posted by Blake Bell at 5:00 PM