Amazing Mysteries: The Bill Everett Archives v1 out in July! 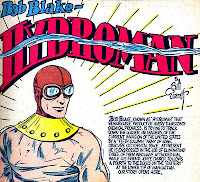 The first volume that reprints Bill Everett's non-Marvel Comics work from 1938-42 will be titled "Amazing Mysteries: The Bill Everett Archives v1" (revealed here for the first time. It will debut at this year's San Diego Comicon, July 2011. Tons of never-before-reprinted material featuring many of Everett's fantastic creations while working for the Funnies, Inc. shop. - Amazing Man, Hydroman, Skyrocket Steele, Dirk The Demon, Skyrocket Steele, Sub Zero and so many more!

Over 200 pages in restored, full color (just my Steve Ditko Archives series)! The majority of the work in what will be a two volume series was being produced at the same time that Bill was drawing the Sub-Mariner for Marvel Comics (known then as Timely Comics) so you know it's high quality material. Stay tuned for tomorrow when we reveal the title for the second volume on the series, to be released July 2012.
Posted by Blake Bell at 10:12 PM