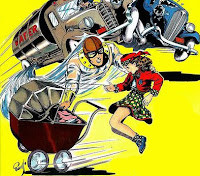 Awhile back, I opened the "Name the Bill Everett Archives" contest, where people could suggest prospective titles to the first volume on the series reprinting (Sub-Mariner creator) Bill Everett's non-Marvel Comics work from 1938-42. Suggest a great title, win a copy of the book that will debut at this year's San Diego Comicon in July.

As we revealed yesterday, the title chosen is "Amazing Mysteries: The Bill Everett Archives v1". True story: Fantagraphics co-publisher, Kim Thompson, is the one who's literally landed the title of (now) all five of my books published by Fantagraphics. I've suggested a bunch for each and he comes in from the bullpen in the ninth inning and closes it out for us!

For volume one, I sent him all the names and he came up with his own, based on "Amazing Mystery Funnies", the comic that featured Bill Everett's first work back in 1938 with his creation, Skyrocket Steele. Kim thought this had a "Golden Age"-type feel that would promote that aspect of the volume (doesn't get much better or older than never-before-reprinted comic-book material from 1938!).

Because no one chose that title, what we're going to do is throw all the names of those who suggested title into a hat and pick a winner. To maintain objectivity, the picker of the winner will be a non-Fantagraphics/non-Blake Bell person, and we'll announce the winner here on the blog.

In looking at the titles for volume one, we also landed on the title for the second volume - "Heroic Comics: The Bill Everett Archives v2" that will debut at the San Diego Comicon in July '12 (a year after volume one). What makes these two volumes so much unique is the vast amount of superheroes that Bill Everett created in a short time and they really have his stamp of fun all over them.

Tomorrow, we'll reveal the cover image for the first volume...and who won the contest for picking the cover image (yes, ladies and gentlemen, we do have an actual winner!...and will the above image be the cover for volume 2? Time will tell...).
Posted by Blake Bell at 9:26 PM