Yesterday, we introduced the notion that Ditko was influenced by the late John Severin, famed EC/Cracked/Marvel Comics artist. We spotlighted a 1959 picture of Ditko in his studio surrounded by 3 Marvel covers (in various stages of production) by Severin, all cover dated Jun/Jul 1957, but there's a couple of pieces under Ditko's drawing table that were really tough to identify. Here's another picture from the same shoot, from a different angle... 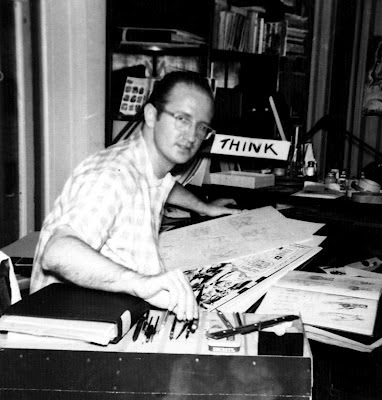 Well, wonder no more about the fully-inked cover (being covered by the pencil page that Ditko is about to ink). Not surprisingly, it's another John Severin cover, but this time it's from 1959 (lending a lot of credence to the dates of these pictures)... 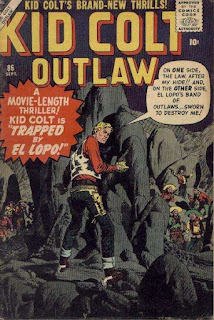 Kid Colt Outlaw #86 is cover-dated Sep '59, less than a year after Stan Lee restarted the Marvel Universe with Strange Worlds, Tales to Astonish and Tales of Suspense with the additions of Kirby and Ditko to his roster. That date should also help narrow down the identity of that penciled page... (to be continued...)

But before we go, never let there be doubt that Ditko didn't draw from his real life... 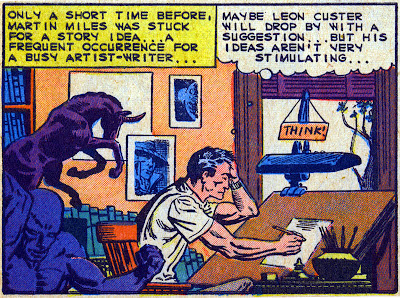 The above is from Space War #6, Aug '60, published by Charlton Comics. Think about it! Ditko always did.

In celebration of the debut of my latest book, Mysterious Traveler: The Steve Ditko Archives vol.3 at the Toronto Comic Arts Festival this weekend, May is "31 Days of Ditko" where I post highly entertaining content everyday on the co-creator of Spider-Man, Dr. Strange, Mr. A, half of #BeforeWatchmen, and many more!
Posted by Blake Bell at 7:59 PM