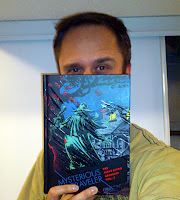 In celebration of the debut of my latest book, Mysterious Traveler: The Steve Ditko Archives vol.3 at the Toronto Comic Arts Festival this weekend, May is "31 Days of Ditko" where I post highly entertaining content everyday on the co-creator of Spider-Man, Dr. Strange, Mr. A, half of #BeforeWatchmen, and many more! (That's me on the right - my copies of the book arrived today, and I must say that the designer folks at Fantagraphics Books Inc. have outdone themselves. The reproduction is unmatched again, natch, but the covers and surrounding insides really capture the atmosphere of the artwork and the whole period for Ditko's 1957 Charlton output.)

John Severin's Untold Influence on Steve Ditko
We lost one of the greats on February 12, 2012. Few artists in comic-book history maintained the artistic standard that they set at the peak of their career all the way through their lives. Gene Colan, and Russ Heath come to mind, and so does John Severin. He never lost it, plain and simple. I can't even say that about Ditko. But few people know that Severin had a direct influence on Ditko.

Part of the reason why few people know this is because we have very few documented examples of Ditko actually speaking about another artist's work in any terms. He wrote a fanzine piece in the mid-'60s on the virtues of Mort Meskin (he shared time with Mort in 1953 at the Joe Simon / Jack Kirby studio). Ditko frequently mentioned the impact of Jerry Robinson as his teacher, but barely any others who inspired/influenced him. In the 1959 letters to fan Mike Britt (that we again spotlight unpublished passages in this book), he does say he enjoyed Harvey Kurtzman's The Jungle Book, but that's about it.

But there was a period in 1959 and 1960 where Ditko's work exhibited a detailed inking style - that "word carving effect - that John Severn did so successfully. It's a unique period in Ditko's career but it's perhaps my favourite because of the beautiful detail in the work. What led Ditko down this path? Coincidence, or something more? Well, take a closer look at one of the three photos of Ditko in his studio that he shared with famed fetish artist Eric Stanton in 1959 (click to enlarge)... 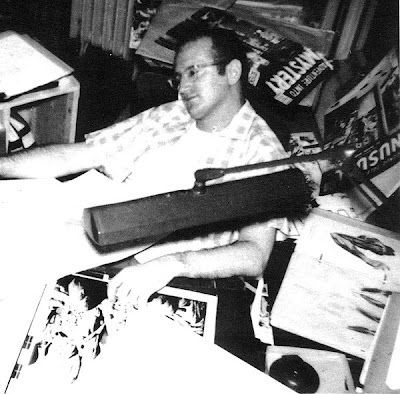 Notice the two large-sized covers, one behind this head, and one just off his left shoulder? Okay, now notice the black and white cover under his left shoulder that you can barely see. One problem: none of these pieces are by Ditko. They are, in fact, all pieces by John Severin. They are John's covers (click to enlarge) for three Marvel books in Jun/Jul '57 - Strange Tales Of The Unusual #10 (Jun ’57), Adventure Into Mystery #8 (Jul ’57) and War Comics #48 (Jul ’57).


While Ditko did do 19 stories for Marvel in 1956, it's startling to see this Severin artwork in this format (not the comics themselves, but the covers at various stages of production). How did Ditko get a hold of those two completely finished covers at this size? Were they stats just collected from the Marvel offices? And what about the black and white cover? Did Severin, or someone at Marvel, just give them to Ditko, so Ditko could practice / observe Severin's work? And Ditko is still referencing them in 1959? Now, about that piece of original art under Ditko's left hand... (continued tomorrow)