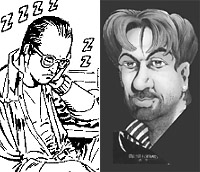 What's a boy to do when three of his "heroes" are Steve Ditko, Dave Sim and Jesus Christ? (Now there's a Last Supper!) How did I stumble onto this collection of individuals vilified for their beliefs (or, at the very least, how they express them), each seeing no "gray", no compromise, and no middle ground. And what does it say about me?

Oh well, I'll save that for my first non-comics book but, for now, let's look back for a few posts on my relationship with Dave Sim, creator of the 300-issue comic Cerebus, as it intersects with talk of Ditko.

My relationship with Dave has its roots back in 2002 when I interviewed Deni Loubert for my first book, I Have To Live With This Guy! She was married to Dave for a time in the 1980s, acted as the publisher of Cerebus and went on to be the publisher of her own company, Renegade Press, publishing some of Ditko's work. I'll save the middle of the relationship story for another time but, in 2008, Dave and I spoke on the phone about my then-just published Ditko biography/art book, Strange and Stranger: The World of Steve Ditko. I'll comment tomorrow on that conversation, but the second act of it was him reading me his just-written review of the book. (Hint, the conversation was very similar to the arch of the review.)

On the weekend that sees the release of the Marvel movie, The Avengers, and its contribution (or lack thereof) to the dialogue on Jack Kirby, Steve Ditko and the company that continues to make billions off of their creations, it seems fitting to share this. Note: tomorrow, I doubt I'll be able to convey the emotion present on both sides during the 3rd act of the conversation between Dave and me, but I'll try...

As I told Blake Bell in a phone message, I think that Strange and Stranger is probably the best book of its kind that I’ve read – certainly preferable to the biography of Wally Wood, Wally’s World that came out back in ’06.

It’s pretty thoroughly researched and annotated, for one thing, which means it’s either the definitive Ditko biography for the ages or the foundational work which subsequent efforts will seek to enhance and amend, develop and correct. At the very least it strikes a very successful balance between the invasion of someone’s private life (a generally unpleasant task made more so by the fact of the subject’s scrupulous maintenance of that privacy), an examination of the art styles and approaches of its subject, capitulation to the intended mainstream audience with Big Pop Art Enlargements of Campy Off-Register Colour (er – that is what the mainstream audience wants isn’t it?), a nice selection of black and white copies of originals and stats (for those of us “weirdos” who are interested in seeing what an artist’s art looks like) (go figure) and a clear chronology of what happened when and why.

To me, it seems pretty straightforward as narrative: this is what Ditko proposes to do, this person or company agrees to what he proposes to do, Ditko does what he says he was going to do and the person or company doesn’t. Ditko goes his own way. At the very least the volume seems misnamed. “Strange and Stranger?” Shouldn’t there be something in the title about Integrity? Particularly given Ditko’s sober second thoughts on all forms of supernatural content (to the extent that he eventually was turning down jobs with supernatural elements, let alone supernatural themes). Granted, in the 21st Century there could be few things more unimaginably strange than integrity – but isn’t that more of a comment on what used to be called the lumpen proletariat than on the perhaps solitary individual still making his decisions based on personal ethics (ethics that get progressively more stringent over the years, rather than more flaccid which is the common route in our society)?

There’s a lot in here that I didn’t know and other things that I had forgotten.

How could I have forgotten that there had been the time when Ditko had offered original Mr. A stories to interested fanzine publishers, gratis, with the only proviso being that they publish the work in a timely fashion and return the originals? Could there have been a more fundamental challenge to the Brave New World of anti-corporate, power to the people rebels? They certainly talked the talk in a way that resonated with Ditko’s rugged individualism. All he was looking for was people who would do what they said they were going to do. The experiment failed miserably, of course, but the fault can scarcely be laid at Ditko’s feet. As with most of his experiments he found that those who talk the talk are legion, those who walk the walk are anecdotal.

They’re all here – or most of them are: like a Greek chorus of Ditko caricatures, all with their rationalizations, their self-congratulation and their mystified expressions. The lessons are all the same, as far as they’re concerned, the bottom line summed up best as “We’re very disappointed in you, Steve Ditko.” It seems never to occur to them to ask why that’s their bottom line, given that Ditko always holds up his end of the bargain. Steve Ditko holds up his end of the bargain – it’s the primary recurrent theme of his self-generated work: the holding up of the respective ends of a bargain, reciprocal satisfaction which results when that takes place, misplaced animosity when it doesn’t – and the people he struck the bargain with end up disappointed in him.

Unfortunately the author and the publisher of the book join that Greek chorus at the end. “We’re very disappointed in you, Steve Ditko.” I kept hoping that there would be a plug for Robin Snyder, the only publisher that Ditko has stuck with and therefore (basic logic would inform us) the only person to hold up his end of the bargain over however many years. Just in case there is a mainstream audience for this and they – or a small fraction of them – are interested in seeing what Steve Ditko has to say about himself, you know? Given that everyone else has his and her say for two hundred and twenty-some-odd pages and the author and publisher have, presumably, made a good buck off of Steve Ditko’s name and stellar reputation and artwork knowing that he implicitly disapproves of what it is they’re doing here…

I get the impression that I’m the only person of my own generation in comics (and possibly of all succeeding generations) who sees the situation clearly. Certainly my primary question for myself was “Where was I?” Back in the 1970s I worked on one of the few successful (that is, it actually came out when it said it would) fanzines, Comic Art News & Reviews. Why didn’t we publish a Ditko Mr. A story since Ditko was making it that easy to do so? Politics, basically. We were all extreme leftists back in the 70s and Ditko, of course, with his ethics which were carved in stone rather than situational like our own, was a fascist, a Nazi. The world couldn’t get far enough, fast enough away from the honour and ethics and morality of a Steve Ditko, couldn’t run far enough fast enough in the other direction. And here we are, as far over in the opposite direction as you can get in just about the kind of world you would expect: inhabited almost exclusively by Steve Ditko caricatures – who turn out not to be caricatures at all. Even back in the 60s, Ditko was drawing accurate portraits of what we were all choosing to become.

Even a nice guy like Blake Bell. I can vouch for him being a nice guy because I’ve spent a certain amount of time in his company and you really can’t fake that gut-level of earnest good guy that Blake exudes. But there’s something about actual ethics that makes even nice guys more than a little loopy when they experience them. Blake writes, “Alas, once again the market proved to be a cruel mistress, and Ditko and Snyder would abandon publishing again after the release, in the summer of 2002, of a comprehensive, 240-page collection of Ditko’s Objectivist comics and essays titled Avenging World that sank without a trace (even most Ditko fans are unaware of its existence).”

Well, you know Robin Snyder just published Ditko’s “Toyland” essays in The Comics in the last year and The Avenging Mind in April. I didn’t even find out about Robin Snyder until late 2006 and managed to buy all of the extant 1990s Ditko material at cover price by mail. So there is a “trace” of Steve Ditko – it’s just that it seems that the largely rancourous, largely unthinking, reflexively leftist comic-book field can’t help “playing to type”: that is behaving like the accurate portraits Steve Ditko has been rendering of them for a good forty years now. Having driven him as far out of the field as we can, just by relentlessly not holding up our sides of any bargain struck with him, we now need to act as if his work “sank without a trace” instead of doing something sort of, you know, honorable (just for the experience – we can always go back to the old way if honour proves to be as unsatisfying as most of us are determined to see it as being).

Like “People interested in helping to supplement Steve Ditko’s extremely modest income can do so by ordering his various new works which are in print and available from Robin Snyder, 3745 Canterbury Lane #81, Bellingham, WA, 98225-1186 USA, email RobinBrigit [at] comcast.net."

Now that simple paragraph could have been on every bookshelf in every comic book store and Barnes and Noble and wherever else these books are going to turn up. Instead it will only appear here in a fanzine. And will probably rile everyone up and start a new round of Evil Dave Sim talk, no one will order anything – and those same people will cry a river of crocodile tears when Steve Ditko passes from this vale of tears.

Acting just the way he’s been drawing them for close to forty years now.

In recognition of the debut of my latest book, Mysterious Traveler: The Steve Ditko Archives vol.3 at the Toronto Comic Arts Festival this weekend, May is "31 Days of Ditko" where I post highly entertaining content everyday on the co-creator of Spider-Man, Dr. Strange, Mr. A, half of #BeforeWatchmen, and many more.
Posted by Blake Bell at 10:29 PM