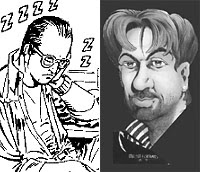 Back in 2007, I restarted work on my Strange & Stranger: The World of Steve Ditko book and, upon learning that Dave Sim (creator of Cerebus and Glamourpuss) was an ardent admirer of Ditko, I sent Dave a whack of late 1950s/early 1960s Ditko material. I asked him to review it on my old Ditko Looked Up website, in exchange for links to his Cerebus trades. I thought I might get a page worth of words, generalities, but Dave sent back a lot of words, with a lot of specifics.

He also sent an introduction for his reviews that I share with you here too. Dave used to do a blog back then, so he posted the intro. there and then linked to my site for the reviews. Only Dave could write an intro. like this...

----------
Okay, we’re all the way up to February 24th in the Mailbag at this point so I either have to start answering these letters in a more cosmetic way or find a seamstress to “let out” the top drawer of the filing cabinet. Let’s see what do we have here?

Inspired by your fantastic blog entries on Steve Ditko’s MR.A, here’s some British B&W reprints of Ditko’s Charlton and pre-Spider-man Marvel work that I won’t be using for my 2008 Ditko book from Fantagraphics, along with some other assorted work from Ditko’s career (including a couple of pages he inked for fetish artist, Eric Stanton).

If you have time, Dave, I’d love to be able to post your thoughts on the work on my web site, Ditko Looked Up. In return, I’d be happy to post a permanent link to your Blog and Mail, as well as list your books for sale (as you do on your Blog and Mail entries).

Of course, I’m torn because I, too, would love to see new work out from you by Christmas!

Actually, I’m still mostly deaf in my left ear but the patches of numbness around the top of my right arm seem to be going away (several of them to the top of my LEFT arm, so go figure), but again it isn’t anything that I can’t work around.

18 MAY UPDATE: Turns out Chester’s been having a little discomfort at the top of his right arm as well. Not pain, but definitely a sensation that doesn’t belong there. He also tripped and fell outside the grocery store a week or so ago – banging his big toe severely and then his knee on the way down: both swollen up dramatically – a few days back and finally went and got x-rays. The toe isn’t broken, just painful and swollen.

Then we talked about our respective root canals. One of his, he bit down on a Korean dish of some kind out with John Tranh and ended up with a mouthful of tooth and filling. Turned out there wasn’t enough tooth left to save so the dentist just pulled that out. Our respective ailments have become a substantial part of our conversation when we get together now. While I was buying a flossing wand in the drug store, Chet was trying out the different canes they had for sale. He had actually thought of buying one when he smunched his toe. What a couple of decrepit old men we have become.

Tell you what I’m going to do, Blake – I’ll take the next few days writing reviews of the work that you sent me and then get Sandeep to e-mail you all of my writing on the subject and you can post it all at once on your Ditko Looked Up website. So everyone reading this, when they get to the bottom of this installment will suddenly realize that you’ve got the whole works posted to your own site and you’ve had it up there since May 20 or so. So, they’ll not only be able to read today and tomorrow and Thursday’s Blog and Mail elsewhere before they can read it here, I’ll also be chasing my entire audience away on the exact day that I finally have a new book in the stores.

It’s just that kind of cagey marketing savvy that has led to me being balanced precariously on the brink of oblivion. No, please, it’s the least I can do in exchange for the Ditko material that you sent. Coincidentally, I also got in parts five and six of Steve Ditko’s latest essay in Robin Snyder’s THE COMICS, so I’ll even be able to talk about that and I may NEVER get my audience back. First the intro:

Dave Sim is a comic-book iconoclast who was the author and co-artist and self-publisher of the world’s only 6,000 page graphic novel available in 16 volumes in most comic book stores (where he would prefer that you buy them) or from the below e-mail address (Win-Mill Productions’ www.followingcerebus.com) with PayPal capability (if you insist). Blake Bell, Your Obedient Website Host here at Ditko Looks Up really honked Mr. Sim off a few years back by writing a book called “I HAVE TO LIVE WITH THIS GUY” in which comic creators’ wives and spouses discussed their personal lives with the creators in question. What honked off Mr. Sim was that he was the only EX-husband to be so “honoured”.

After cutting Mr. Bell dead on the spot on a couple of occasions, a temporary case of Alzheimer’s seized Mr. Sim at TCAF in 2007 and he offered his chair to someone with a friendly face who looked sort of familiar and who turned out to be Mr. Bell. Mr. Bell, taking this as a sign of uncharacteristic grace and forgiveness (rather than as the outward manifestation of early-onset senility that it was) later engaged Mr. Sim in conversation, asking his forgiveness, mentioning as he did so that the two individuals in the comic-book field who Mr. Bell held in the highest regard are Mr. Sim and Steve Ditko and that he had managed to honk both of them off abominably. Which was just touchingly funny enough to square things with one of them, anyway.

In addition to working on a secret comics project, Mr. Sim has been writing the daily blog the Blog and Mail since 13 September 06 even though he isn’t hooked up to the Internet. He accomplishes this by writing roughly three weeks’ worth of blog entries in a three-day period and then having them posted one at a time (by long-time Cerebus reader and Cerebus Yahoo Newsgroup Co-Administrator Jeff Tundis) (Take a bow, Jeff) to create the illusion of daily blogging. In exchange for tapping into the Vast Ditko Looked Up Audience and the bribe of a permanent link to the Blog & Mail from Ditko Looked Up and a plug for his sixteen trade paperbacks and two Collected Letters volumes, Mr. Sim has agreed to review several Ditko stories that didn’t make the cut for Blake Bell’s forthcoming Steve Ditko volume soon to be published by Fantagraphics.

While Dave Sim is unbecomingly curious if Mr. Ditko is a) STILL honked off at Blake Bell and b) foisting Blake Bell upon Mr. Ditko as the author of the Big Ditko Coffee Table Book is just another example of Gary Groth’s insidious back-stabbing wit, Mr. Sim is too much of a gentlemen to address such a thing here at someone else’s website.

18 MAY UPDATE: Chester thought that the reason Steve Ditko was honked off at Blake Bell was BECAUSE of the coffee table book: that Ditko’s notorious urge for absolute privacy rebelled at the idea of any kind of biography. Hey, it’s a theory! I had also written about how Blake had expressed contrition over his treatment of me as an ex-husband now that he is an ex-husband himself. Then I tried to call him and there was a female voice on the answering machine. Hmm. Maybe I imagined that part. No, Chet told me that Blake is out of his marriage and into a new relationship. As someone once said, that represents the triumph of hope over experience.

And so, to the capsule reviews:

Oops. Out of space for today. Click over to Blake’s “Ditko Looked Up” website and he should have them all posted. Or you can read them here where I’ll be posting a few of them at a time, without illustrations.
----------

(Blake again) We'll post the reviews tomorrow, as it's late and I have to go search my brain for memories of all that "asking forgiveness" and "contrition" that I allegedly did in our 2007 TCAF meeting, but why argument semantics when there's pre-Spider-Man Ditko to be reviewed and reveled in. Plus, unlike how Dave gets painted, he was extremely charitable then, and since, given how my Have To Live With This Guy! likely would have landed with anyone in a similar position (I have questioned myself as to the purity of my motives in some of the choices made in that particular chapter), so grace for grace, indeed.

In recognition of the debut of my latest book, Mysterious Traveler: The Steve Ditko Archives vol.3 at the Toronto Comic Arts Festival this weekend, May is "31 Days of Ditko" where I post highly entertaining content everyday on the co-creator of Spider-Man, Dr. Strange, Mr. A, half of #BeforeWatchmen, and many more.
Posted by Blake Bell at 12:39 AM